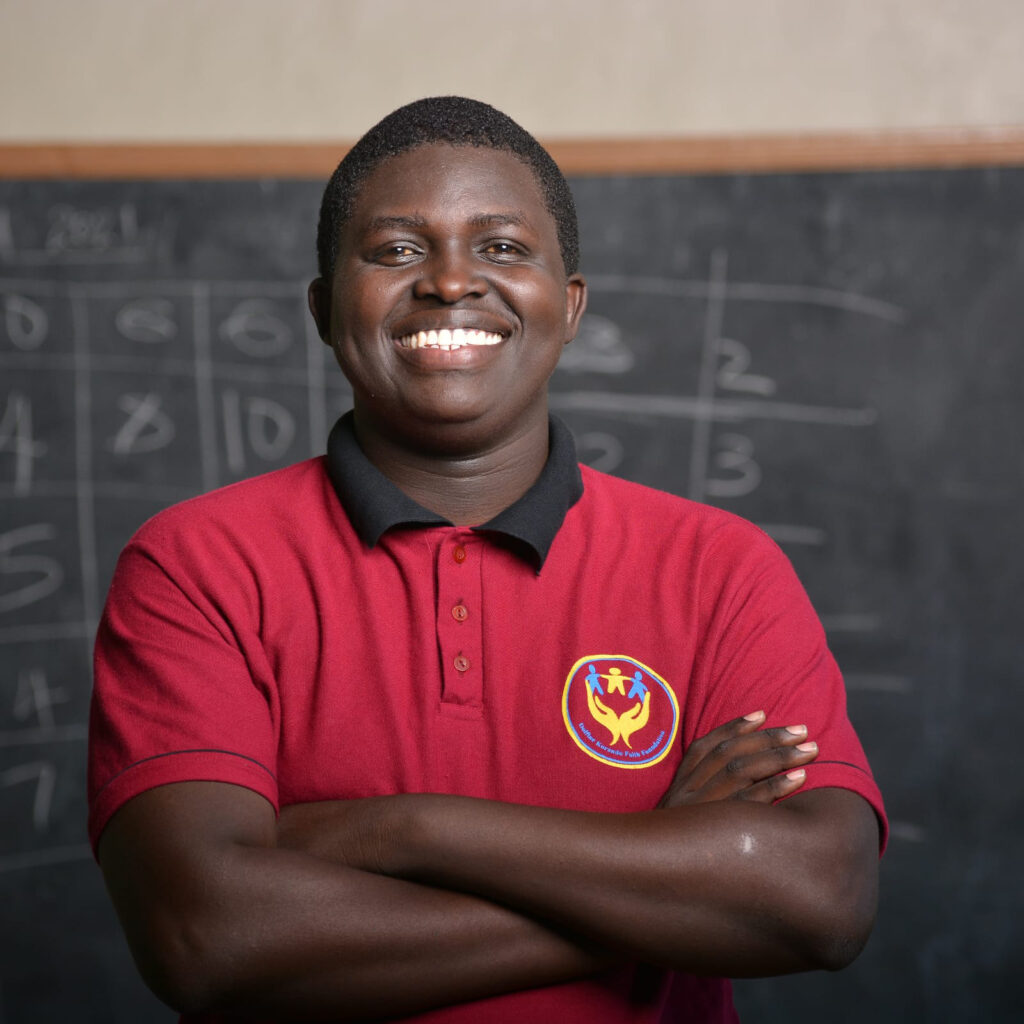 Benson “Ben” Abila is the grandson of Mama Dolfine, and an emerging community leader in his hometown of Kisumu. Though he began his education at public school, Ben later moved to the Center and graduated from Korando. After attending university in Nairobi and obtaining a degree in Civil Engineering, he has felt his calling back with the vulnerable populations of Kisumu. Ben is the Founder and Director of Homeless of Kisumu, an organization which offers support to “street connected children, youth, and women as well as vulnerable families.” His organization has gained national attention in Kenya and in the summer of 2022 Ben traveled to the US at the invitation of the State Department to participate in the Mandela Washington Fellowship for Young African Leaders. Ben also serves on the Board of the KEC, and he remains deeply committed to serving Korando, the place he refers to as his true “home.” REP volunteers sat down with Ben in August to unravel the many chapters of his story.

“The first thing you need to know about me is that I am product of the ripple effect of love and kindness that has been extended to Korando over the years. Without Korando, I would not be here.” Benson was born in January of 1996 to Dolfine’s daughter Pamela, and his father Walter, a teacher. He grew up in the slums of Kisumu, and although they lived simply Ben recalled that his father’s emphasis on education kept him rooted in academics above material goods: “My dad was a teacher. He was a minimalist, but he valued education so much. He instilled the value of academics.” Though his parents divorced, his family prioritized funds for him to attend a quality public school. By this time, his grandmother Dolfine had started a small school and orphanage at Korando, and his grandfather Patrick was acting as Headmaster. While Ben would visit from time to time to see his family, his connection to Korando was distant.

Everything changed when his father passed away. Missing his father’s academic encouragement, Ben sought to follow his example and clung tight to his education, “In my head, academics was all that I had.” This period brought pain and discomfort, as Ben moved several times between the care of his aunt and the care of his mother and stepfather. These life changes left Ben at the mercy of circumstances beyond his control, and while staying with family members, he experienced many transitions and a lack of consistency. Challenging family circumstances left Ben struggling to overcome feelings of rejection, discrimination, and injustice. However, the emotional education this period provided would come in handy a decade later, when the young boy would grow into a man with a mission.

In 2009, Ben’s only option to continue his education was to come live and study at the Center, where he began his 8th grade year. The Korando school was still getting established, and could not compare academically or physically to his previous school. “The boys dorm then was mud floors, the school was a mud and stick building.” Ben described a lack of books, a difficulty acquiring skilled teachers, and lower test scores for all in those early years of Korando’s operation. However, it was here that Ben found a consistent, loving and principled environment—a feeling of home he had not experienced in years. In hindsight he sees Korando as the place that gave him a solid foundation upon which to build his character: “At Korando I learned the act of giving, the act of loving, caring and service. The values that I got there were very pivotal for me. Also I learned about being able to provide hope. If I hadn’t experienced the ripple effect of the love and kindness, I would not be able to give it back. It gave me an opportunity to keep learning, keep going to school. It humbles you, being a part of that community.”

Academics kept Benson anchored through high school, and he was admitted to a competitive program in Nairobi to become a Civil Engineer. Those university years brought Ben a feeling of freedom that he hadn’t experienced before, but it also brought a sense of despair and aimlessness. He realized at university that academics weren’t everything, and for a time tried to fill his life with unhealthy personal and social habits. He lost his sense of who he was and what he was working for. Knowing he had younger brothers that were watching him as an example, Ben sought to pull himself out of a hole, and rediscover his purpose.

Benson joined the Toastmasters, an organization that teaches public speaking and leadership skills, where he found his spark again. He began to realize that he was invested in relationships and people, and his confidence and self-esteem grew. After graduating, Ben eventually moved back to Kisumu and took a position with Korando, focused on local fundraising through relationship building and connecting with people. This was a challenging and, at times, daunting task but he stuck with it.

While working for Korando, he began to see more of the plight of the homeless boys and men of Kisumu. In the early months of the COVID pandemic, the need grew even greater. Ben’s first attempt to feed the homeless was on August 1, 2020. He saw the need to provide not only food but to also bring hope and love, to make this population feel seen and connect with them as human beings. He realized that his effort paid off when days later some of the street kids thanked him. Benson was hooked and his fire was rekindled. As the months went on, Ben faithfully kept returning to the street connected community, and in January 2021 Dolfine said to her grandson, “You can put that engineering degree under the suitcase because you’ve found your passion.” His grandmother had given him the validation of what he was already feeling—that he had found his calling at last.

The program he started two years ago is now known as “Homeless of Kisumu.” Benson leads a group of 20+ volunteers at any given time (over 300 volunteers have participated in total) to provide a helping hand to the street community of Kisumu. Weekly, they run a program providing breakfast, fellowship, sports (to help boost self-esteem), art, clothing, and services to help support the homeless population where they are. Ben was able to connect with the homeless population in part because of the experiences he had as a teen, recalling his own feelings of rejection and discrimination. He knew the sting of hopelessness, the feeling of not being accepted and pushed away. But Ben also knew the feeling of love and support, and he wanted to help provide that for the boys and men on the street. He focuses his programs on psychosocial support of these individuals, and the volunteers include teachers, lawyers, and social workers. Through his efforts, some children are attending school again, and he has also connected motivated adults with job training. The mission of his organization is to “Restore dignity to humanity,” and he upholds this standard by the way he and his volunteers treat every person they come across, regardless of their circumstances. To him, the process is actually a simple one: “We go into a place where there is despair, and we bring light and hope.”

His consistency and commitment eventually attracted the attention of Kenyan TV and newspapers that highlighted his efforts in 2021. Along the way, Ben has developed connections with all levels of city and county government, local Kisumu non-profit organizations, and religious and social service organizations. As the Director, he maintains contacts with people all over the community. He also brings the benefit of these partnerships full circle back to Korando, where he sits as the youngest member of their Board. Once he got national press, a friend suggested he apply to the Mandela Washington Fellowship to be recognized as a Young African Leader. When it came time to apply, he couldn’t help but write about his time at Korando, and what he gained from it. He was accepted to the program in 2022, and came to study in the US at the invitation of the State Department. Following the program in Michigan, Ben traveled to Maine to network with the Ripple Effect Project team and donors.

When asked how Korando shaped him, and opened the doors that led him to serving the homeless, Ben had no difficulty being specific: “One thing I got from Korando was inspiration. Seeing Mama do things—that inspired me. Also Christian values, I had to experience in Korando the values. As an adult, Korando has given me opportunity and a support system. Korando has given me everything I needed. It also gave me patience; Korando has been patient with me to find myself.” Ben also says the work that Korando has done within the community leant credibility to his work with the homeless—as the KEC’s profile has grown, their reputation for integrity in Kisumu has grown as well. The association with Korando’s history of service is a positive one. Additionally, many Korando graduates are now established and working within the community, and one such alumni even lent Ben a helping hand when he needed help with his US Visa application.

Thirteen years after Ben came to the center, he wanted all REP donors and volunteers to understand exactly how much has changed for Korando, and the impact that it has had on thousands of children over the years. “Korando has transformed. When I went to Korando at Grade 8, the classroom was mud thatched. We didn’t have teachers, we didn’t have books. Now we have a two-story building, where the children have desks, they have standard size classrooms, teachers who are trained and invested. Everything is improved. Life at the center has gotten better for the children. The children have their own beds, their own mattresses, food. It’s been years of transformation. The education, the values we have imparted…the learning at Korando happens beyond the classroom. I’m here to tell you: you don’t know how much you will be changing the world by supporting the Korando community.”